From cider to bobbing for apples, many of our fall time traditions depend on ripe delicious apples, and lucky for us we have one of the most popular apple orchards in America right here in our own backyard, Beak & Skiff Apple Orchards. Beak & Skiff was founded in 1911 by farmers George Skiff and Andrew Beak on a hillside off of Route 20 in Lafayette, New York. They made their money wholesaling apples to local shops and grocery stores. Over the next 60 years Beak & Skiff worked hard to grow their business, pioneering innovation in the industry. They were one of the first apple orchards to combat frost by burning smudge pots on cold spring mornings and started the trend of storing apples in controlled atmosphere rooms to increase the fruit’s longevity.

In 1975 the business saw an opportunity to start diversifying and opened up a portion of the orchard to customers for apple picking. This area was deemed Apple Hill and visiting has become a tradition for many Upstate New York families every year. This was also about the time when Beak & Skiff started producing their famous Apple Cider for wholesale distribution. 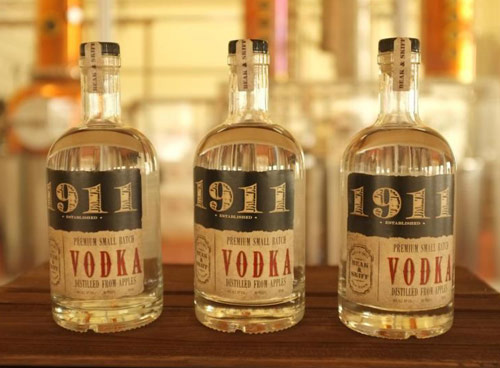 Fast forwarding to 2001, Beak & Skiff found another avenue to diversify their business as they released their 1911 product line of hard ciders, named in honor of the year they first opened their business. These products were first released on cruise ships around the country but after an overwhelmingly positive response they quickly moved into the retail space. The success in the hard cider arena prompted the business to release a line of spirits under the 1911 brand. This was something new to the area as they were the first company in Onondaga County to hold a distillery license.

Beak & Skiff has grown to a nationally recognized brand loved by thousands across the country. They developed from their humble beginnings as a local Central New York orchard into a juggernaut in the apple, and hard cider industries. As another local New York business it has been our pleasure to provide the orchards with storage containers for all their space needs over the years. We are glad we were able to be a small part in their sensational story and look forward to continued relationship moving forward.