A-Verdi in the Community: Let Them LOL

Everyday nearly 4,000 children die due to diseases caused by unclean drinking water. 1 billion people, approximately 15% of the world’s population, do not have access to clean drinking water. These alarming statistics prompted Joe and Kate Vacanti to do everything they could lend a hand and eventually led to the creation of Let Them LOL.

Let Them LOL is a company founded on the idea that laughter brings everyone happiness. They started by creating a simple ringtone. They recorded a comical laugh by one of their company’s co-founders and started selling it for $3 a download, with the proceeds going to help regions plagued by a lack of drinkable water. They have used their earnings to build wells, care for orphans, and provide education to these areas. Since their beginning they have started other fundraising programs that all aim to help the large chunk of our population without clean water. Events include water galas, 5k walks/runs, and golf tournaments with one goal in mind, raising awareness and money to help end this problem. 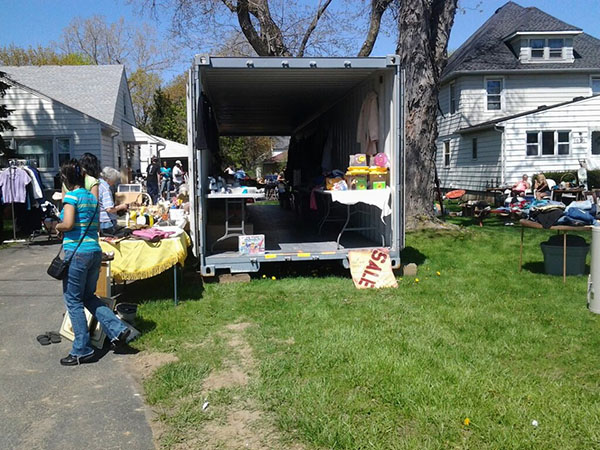 Recently we were given the honor to work with Let Them LOL on an event close to home. This year, on the weekend of August
12, Let Them LOL is hosting a giant yard sale in Buffalo New York to raise money for their noble cause. They are collecting donations of anything you would expect to see at a garage sale as well as school supplies and children’s clothing that they will ship to their school in Sierra Leone, West Africa. We are proud to provide Let Them LOL with storage containers they are using to hold donations until the event.

Such a big problem cannot be solved by one person or a single company. It takes involvement from the entire community, near and far. We are proud to do our part to help the organization and look forward to more events like this in Western New York. Come out to the sale August 12th or 13th. There is even time to donate if you have some old stuff that you wouldn’t miss lying around. Join us and Let Them LOL in being part of many great things in Upstate New York.