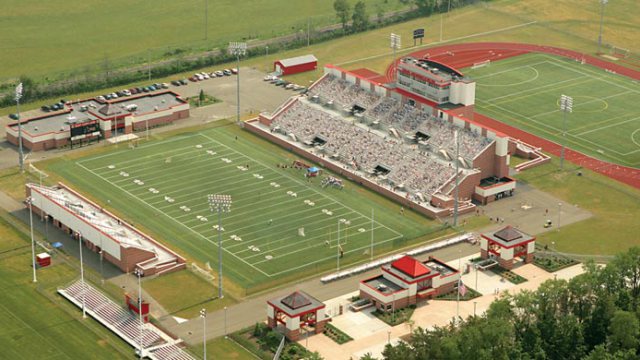 The end of July is an exciting time of year for us Football fans as we get our first glimpse of football after a long offseason. Over the next week many teams will be starting their training camp and one in particular will hold a special place in our heart. For five out the last six seasons the New York Jets have made the trip to Central New York to host their training camp at SUNY Cortland. Each year nearly 25,000 fans from all over the world flocked to the region, generating around four and half million dollars a year. Since 2009 the camp has had a $24 million impact on the area’s economy.

Even though a lot of this money was spent by fans and visitors, the Jets did their fair of spending and promoted some local Upstate New York businesses. We were lucky enough to be one of these local business partners during the Jet’s stay at Cortland. Each year we rented them 20’ containers that were used to store athletic equipment and supplies. As a New York born and raised business who already works extensively with SUNY Cortland it made sense for them to choose us, as we could provide personalized service and expertise that allowed us to move the containers on and off site better than our competition.

Sadly, after some drastic staff changes in the offseason, the training camp will no longer be held at SUNY Cortland. Jets owner Woody Johnson thanked the local community for all their support while on the Cortland campus and stated that the Jets really enjoyed coming the region. Even though the organization loved the relationships they built within the Cortland community they felt it was time to move on to a larger facility that would allow more fans to enjoy the training camp experience. We want to thank the Jets for all they have done for Central New York and wish them the best of luck at their new facility in Florham Park, NJ and on their upcoming season.

Whether you a professional sports team getting ready for a tough season, or a homeowner just looking to remodel their bathroom, we have a storage solution that is right for you. Our ground level offices and shipping containers provide a flexible, convenient, and affordable space for you to store just about anything. If you are in need of a little extra space give us a call and we’ll be happy to help!